I can’t believe it’s almost April already. Where has all that time gone? Three whole months of 2012 have just whizzed by. Before I know it, it’s going to be Christmas… eeep.

That said, there are a few things I love about April. One of which, is of course how it means that summer (and all the wonderful berries that come with it) is just around the corner. The other is rather interestingly… Easter! Again I suspect this is because it’s not a huge thing back home in Malaysia, as opposed to over here in London where you see Easter eggs being sold from February onwards.

Those of you who have been reading the blog know that I’m a fan of Hotel Chocolat and their beautiful range of chocolates – festive themed, or not.

Their chocolate range gets more impressive each year, and I always look forward to seeing what new twists they come up with. This year’s Easter selection is the best one I’ve seen yet, with a few things I don’t remember seeing last year. I am particularly amused by the chocolate hot cross buns (pictured above)… they’re SOOOO cute! This is one of the things I don’t remember seeing last year (my memory is horrendous though), but I’d definitely say it’s a keeper.

Hotel Chocolat are also known for their extra thick Easter eggs, which boast luxuriously thick chocolate shells (thicker than your average Easter egg). I always say there is no such thing as too much chocolate, and it’s as if they read my mind! 😉

Because I’ve not tried any of their dark chocolate ranges before, I thought it would be nice to try their Serious Dark Fix Easter Egg. The giant egg comes in a lovely keepsake box – I love food that comes in containers/boxes that I can keep and reuse, and this is an example of that. I have been known to buy biscuits and jams just so I can have the tins/jars that they come in… 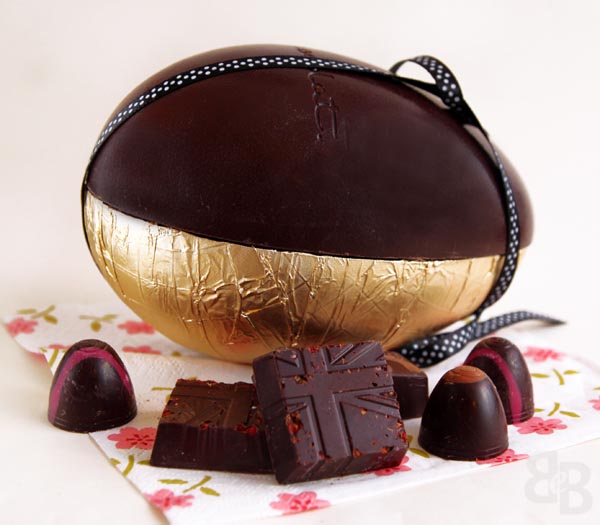 There’s also a surprise collection of chocolates hidden within the egg, and happily they’ve included one of my favourite chocolate flavour combinations: salted dark caramels. The raspberry liqueur truffles come a close second. The other flavours include: chilli pralines, black cherry truffles, espresso truffles, and rum truffles. If you haven’t already noticed, all the truffles/mini chocolates are from Hotel Chocolat’s dark chocolate range – thus the name ‘Dark Fix’. (And on a side note, I must say I love the Union Jack shaped chilli praline!)

I know I normally hold a giveaway alongside a review, but I’ve been extremely busy with work and as such have left it a little late to photograph & write the post… so there unfortunately won’t be one this time around as it’s already so close to Easter. Apologies!

But anyhow, if you’re looking for an Easter Egg to knock the socks off a child, significant other, or best friend – look no further! (I wouldn’t give the dark chocolate egg to a child though, the milk one will probably go down a lot better).

Have a very chocolate-y Easter! (I know I will) 😀

* I received a Extra Dark Fix Extra Thick Easter Egg from Hotel Chocolat, but all the views expressed are my own. Non-watermarked photos are courtesy of Hotel Chocolat.

One thought on “A very chocolate-y Easter!”