Macarons have taken the world by storm in the recent years, and I can understand why. These little babies are not only beautiful to look at, but are also a delight to eat. Biting into their crispy exterior gives way to a delicately soft and sweet shell, followed a decadently smooth ganache or buttercream. How could one resist? 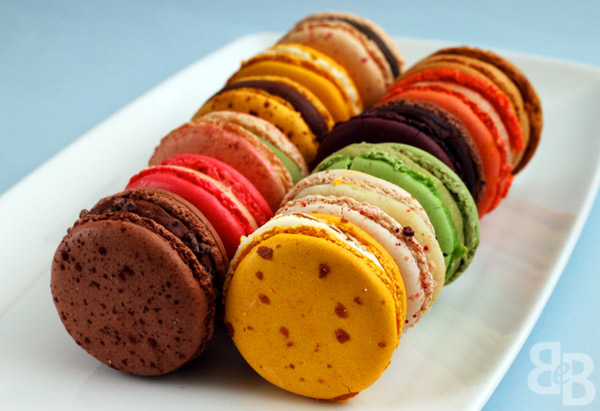 Macaron shells are suppposed to be completely flat (dome like shells are frowned upon), and should have a lovely “rim” along the bottoms, or “feet” as they are more commonly called. Now, you may think these little morsels of delight are easy to make, but boy they aren’t. I personally haven’t tried making them before, but lots of bloggers out there have – and they will tell you that macarons are VERY temperamental, and one can never assume that they will turn out right. I can only assume that this is why macarons are so expensive, but when they taste as good as they do… I am willing to pay for them.

This brings me on to the macarons of Pierre Hermé. They do not come cheap, but boy they are worth it. This man is a total genius when it comes to macarons, and I truly believe he makes some of the best macarons available today. I’ve tried macarons from Ladureé as well, but I prefer Pierre Hermé. So imagine my pure delight when I found out (through the twitter grapevine) that he was opening a store/counter in Selfridges! I made a note of the date, but didn’t actually make my way to Selfridges till last week – and was reminded of why I love Pierre Hermé so.

Now, although I have a huge backlog of posts, I decided to post this as it is Macaron Day today (20 March). What’s that you say? Well, Macaron Day (Jour du Macaron) was created by Pierre Hermé and the other members of L’association Relais Desserts (of which Pierre Hermé is joint-vice president). The purpose of Jour du Macaron is to raise awareness (and money) for charity. On this day, you can visit any of the participating pastry stores (including all the Pierre Hermé botiques) in Paris (not in London unfortunately), and get yourself some free macarons. Yup, free. Donation boxes are set up in each store for optional donations to the charity of choice for that year (I believe it is l’Alliance des Maladies Rares this year, but correct me if I’m wrong).

On the day I went to pay a visit to the Selfridges store, they had 12 different macarons on offer. Which is why I chose to get the a box of 12 macarons, as it meant I did not have to decide which flavours to get/not get. (Have I ever mentioned that I take ridiculously long to decide on such matters?) It was possible to buy them loose (it’s slightly cheaper to buy them this way at £1.70 each), but I felt that it was safer to buy them in a box. I’m not the most dainty person around, and if I had brought them back in a flimsy plastic bag, goodness knows what would have happened to them. (Oh, and I still managed to crush a few of them as evidenced by the photos even with this box.) 😛

I didn’t take any photos of the store/counter, but if you want to know what it looks like do check out this post from Pig Pig’s Corner on Pierre Hermé’s Selfridges counter. 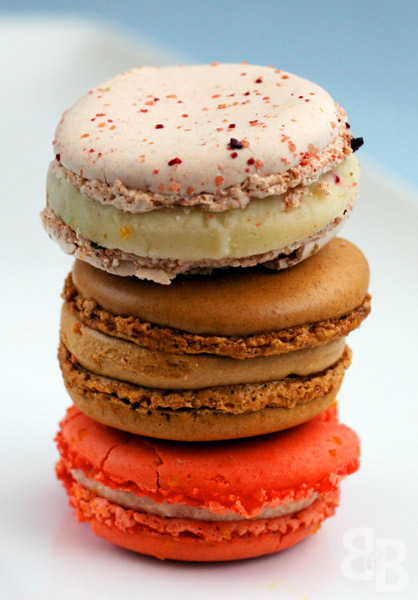 From the top: Magnifique (strawberry & wasabi), Infiniment caramel (salted butter caramel cream), Coing rose (rose & quince). I really liked the salted butter caramel cream one, as the sweet and salty notes complemented each other perfectly. And although it seems strange to pair strawberry with wasabi, it actually worked pretty well (partly because the wasabi flavour wasn’t too strong). 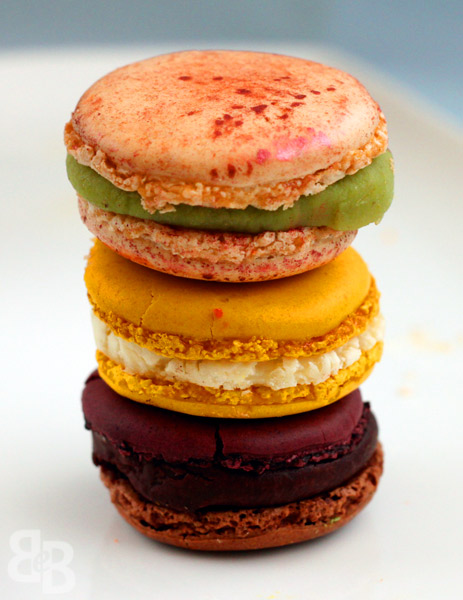 From the top: Mosaic (pistachio, griottines & cinnamon), Citron (lemon), Chuao (Chuao dark chocolate, blackcurrant & blackcurrant berries). Whilst the Mosaic was by far the most attractive of the three, the Chuao trumped it when it came to taste. The blackcurrants went remarkably well with the chocolate, and is now one of my favourite macaron flavours (until Pierre Hermé comes up with more flavours to blow me away of course). 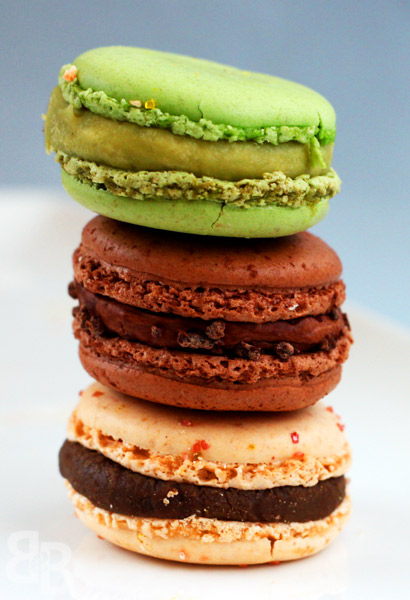 From the top: Pistache (pistachio), Chocolat (Venezuala Porcelana dark chocolate), Fragola (strawberry & balsamic vinegar). These were all good, but weren’t as spectacular as some of the others. 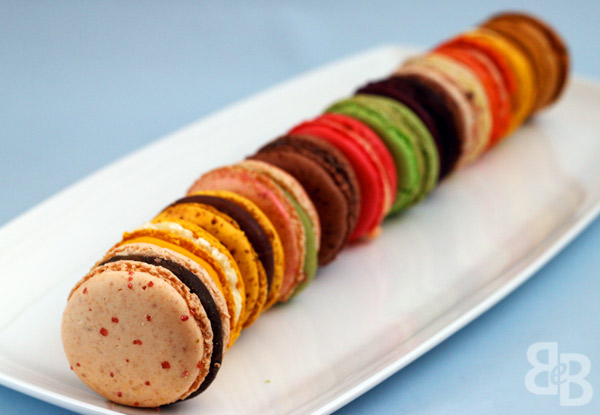 One thing to note though – after writing this post, I realised that I didn’t actually get the 12 flavours on offer that day. The displays showed the Arabesque (apricot, pistachio & pistachio praline), but I did not have this in my box. I go the the Magnifique (strawberry & wasabi) in it’s place. Now I’m not complaining because I still got my 12 macarons, but oh my it made matching the names to macarons quite confusing. I could have gone without naming them, but the OCD in me could not allow that to happen. 😀

I managed to make these macarons last 2 days (I am quite happy that I managed to refrain from scoffing them all down in one sitting), and those were very good days. I’ll be going back soon, as I’m very keen to try his olive oil & vanilla macaron – I hear it’s amazing.

p.s Pierre Hermé will be opening an actual store in Knightsbridge this year, and I for one cannot wait! 🙂