I’d never heard of Pierre Marcolini before last week… but all this changed when I was researching the food (and chocolates) of Belgium. I came across and article which said that he was one of best chocolatiers in the world, which obviously meant I immediately put it on my “to eat” list. 😀 According to his website, his main store was in Place du Sablon… so I marked it on my map, as I already knew that I had to try his chocolates.

Imagine my delight when I went to Place du Sablon, and not only saw the Pierre Marcolini store, but also a Godiva store (one of the few stores which sold Chocolixir – their chocolate drink), and a Nehaus store. Pure bliss for a chocolate lover such as myself! Needless to say, I consumed a LOT of chocolate in the 3 days I spent in Brussels and Bruges, and this does not include the chocolates I brought back to London! (Photos to come in a later post)

Pierre Marcolini not only makes chocolates, but also a whole range of other items such as macarons, biscuits and mini-gateauxs (I doubt this is the right term to describe them). Unfortunately, photos are not allowed in his stores, so all I have are photos of the window displays… 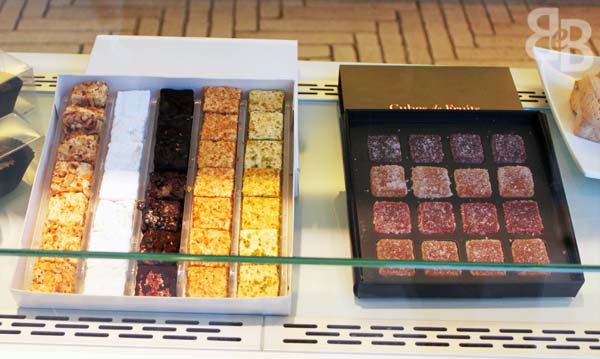 Lighter-than-air marshmallows (on the R), and fruit cubes (on the L). I did not try the fruit cubes, but the marshmallows were delightfully light – I tried the pistachio flavoured one and it was nutty with a hint of lemon. Unfortunately they are only sold in boxes of 35, which was dissapointing as I would have bought a smaller box had it been available.

A larger version of one of his mini-gateaux cakes 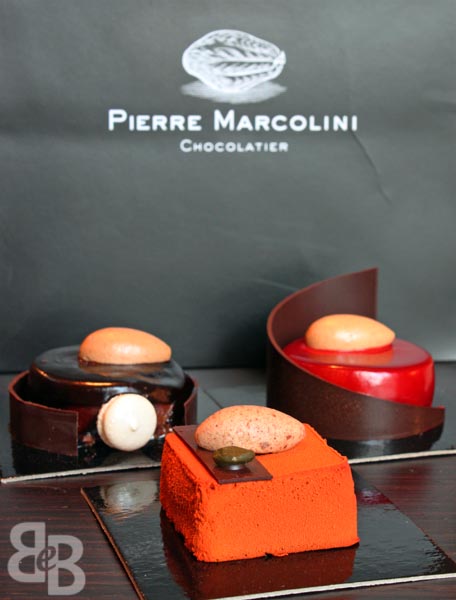 The mini-gateaux cakes I bought 😀

This was my favourite of the three – a chocolate based gateaux covered in a raspberry infused ganache. I’m afraid I can’t describe this in any more detail, as this was all the information I got from the man at the store… All I can say is that it was delicious, and the colour of this does make it rather attractive!

Java – a coffee based gateaux, with a dark and milk chocolate sabayon beneath all that orangey-ness. 😛 If I remember correctly, there was also a thin layer of biscuit (feuilletine perhaps?) in it which added a good contrast of textures. And again, this was very good.

Envol – dark chocolate sabayon and a layer of orange flavoured creme brulee, topped with a dark chocolate ganache. This was also good, but I found it slightly less interesting compared to the other two. Needless to say, I still enjoyed it! 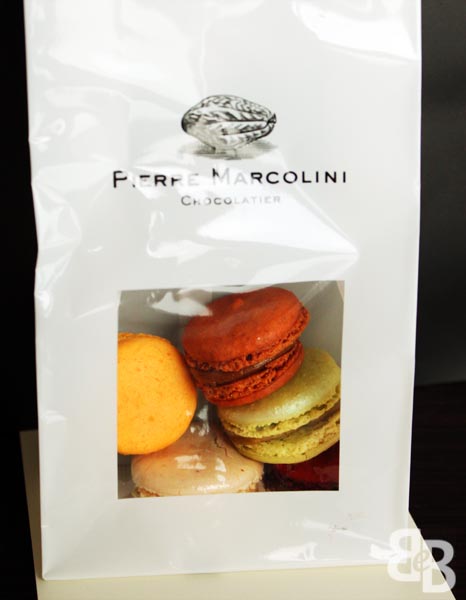 I also tried his macarons as they looked too good to resist. He makes them in 5 flavours – pistachio (green), coffee (brown), vanilla (white), chocolate (red) and caramel (yellow). Having tried Pierre Herme and Laduree macarons in the past, I must say that Pierre Marcolini’s macarons are pretty good, especially the pistachio and chocolate flavoured ones. Texture wise, I found his macarons slightly on the soft side, and I must say I prefer the texture of Pierre Herme’s as there is slightly more ‘crunch’ when you bite into them. Pierre Herme also has a better range of macaron flavours.

It took self control to stop eating the half eaten macaron so I could photograph it!

I also bought a tasting box of Marcolini chocolates, which I shall blog about in a future post as I’ve already gone slightly overboard with the photos. To those who have tasted his creations, I would be interested to know what you think of them. 🙂

I first discovered this lovely little Japanese store a year ago, and have been in love with the store ever since. The store describes itself as a Japanese confectionery store which sells “wagashi” – which are traditional confectioneries served during tea ceremonies. Wikipedia has more information on wagashi here, if you’re interested.

One of the reasons I am fascinated by wagashi is the fact that so much thought and effort is put into each piece, from the actual food item down to its packaging. I have a weakness for anything that is packaged beautifully, which is not always a good thing when you’re in such a store! 😛

When you first walk into this store, you will realise almost instantly that each type of wagashi is represented by a “model” wagashi, once again beautifully presented. It’s a nice touch as you get a rough idea of what to expect inside the individual packages. 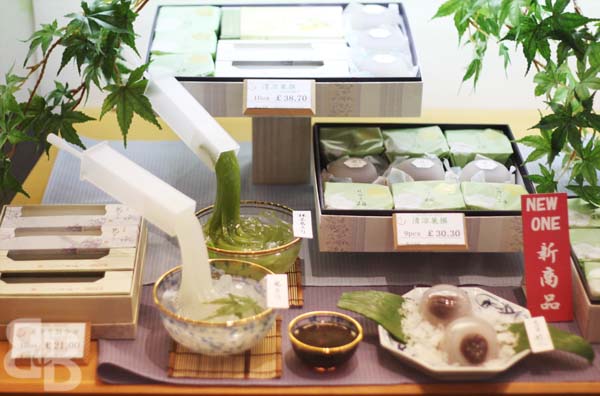 Kuzukiri – Japanese jelly made using high quality arrowroot. 2 flavours: Brown sugar (comes with brown sugar syrup), and green tea (with green tea syrup). The store says that the jelly should be mixed with the syrup, and enjoyed cold. 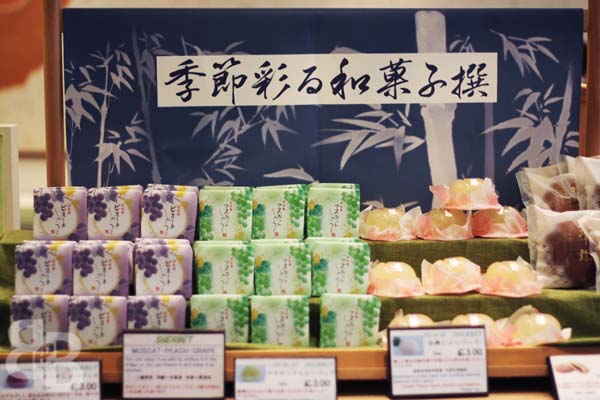 Sherbet – 3 flavours: mascat, white peach and grape. It can be enjoyed in two ways – either pop it into the fridge to enjoy a cold jelly, or into the freezer to enjoy a sherbet. 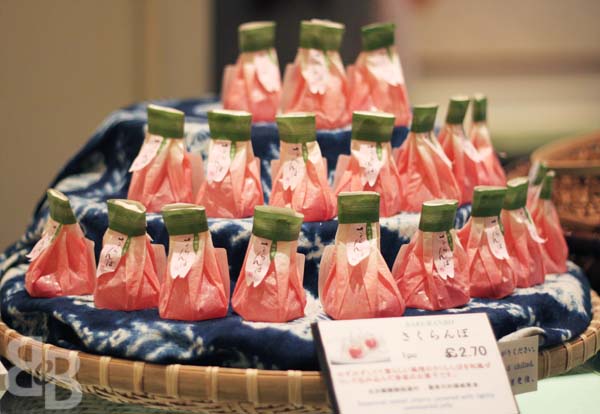 Sakuranbo – Japanese cherry covered with lightly sweetened jelly, packaged in spring colours. (I’ve tried this in the past and it’s delightfully light, with just the right amount of fruitiness)

The kasutera pictured above is one of my favourite cakes. It’s essentially a Japanese sponge cake made from sweet rice. The texture of this cake is dreamy, as it is very light and airy… which means that one can easily consume quite a few slices of the cake in one sitting. 😀

However, all nice things come at a price. The wagashi sold here range from approximately £2-£5 per item (they can also be bought in box sets), whilst a “log” of  kasutera (~15 thin slices) costs £14. Some of the other cakes cost up to £25. Having said that, the wagashi is definitely worth a try, and I cannot recommend it highly enough. 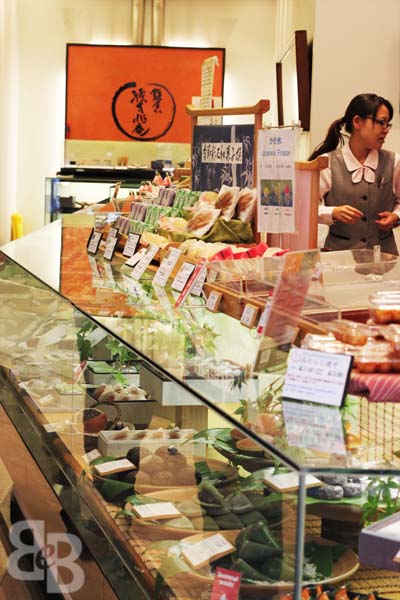