Every so often, I make something that makes me REALLY excited and happy. If you recall, I received an ice cream maker from the Fairy Hobmother not so long ago, and I was itching to make some ice cream. And so I did.

Two days later, I decided it was time to make some ice cream yet again, and this time experimented with incorporating Milo into the ice cream custard mixture. For those of you who don’t know what Milo is… where have you been?!! Kidding. 😛 I daresay any person who’s from South East Asia (and I even dare to say Australia) grew up with Milo, which is a chocolate and malt powder which is mixed with milk/water (and a touch of condensed milk *cough*) to make up one of the best ‘hot chocolate’ drinks EVER.

The Milo truck used to come by our school all the time, giving out cups of ice cold Milo on a hot humid day (let’s face it, when is it not hot and humid in Malaysia?)… fond memories. 🙂 According to the Milo website, Milo contains ACTIGEN-E®, a combination of 8 vitamins and 4 minerals that helps to optimize the release of energy from food. These are the B Vitamins (B1, B2, B3, B5, B6, B12, Biotin); Vitamin C; Calcium; Magnesium; Iron; and Phosphorus. This is supposed to give one the energy to get through the day’s activities uninterrupted. (I tend to drink it before I sleep though, so I can’t vouch for this energy thing).

Most of you Malaysians and Singaporeans out there may also remember all those Milo ads on the television with their tag line of “It’s marvelous what Milo can do for you!”. I suspect it’s not as “marvelous” for you when you eat it out of the tin with a spoon on a regular basis (like me), but you know what, it’s so good that I can’t stop myself from doing it.

So yes. I MADE MILO ICE CREAM! I churned the ice cream at 11.30pm, and could not bring myself to eat ice cream just before going to bed. Also, I did want it to solidify a bit more so it could reach the right ice cream consistency. So this meant that whilst at work the next day, all I could think about was my Milo ice cream. I kid you not when I say the journey home from work never took so long (and it only takes me 20 minutes), as I was so excited about trying it. Ah, the little pleasures in life. 😉

The moment I got home, I rushed to the kitchen, opened the freezer, dipped a spoon into the ice cream, and….. BLISS. I absolutely loved how it tasted, and had to stop myself from eating up the whole tub pre-dinner.

Later that day, I was more civilized and served the ice cream in teeny little bowls I bought when I was in New York, and topped the ice cream with… you guessed it, MORE Milo. What can I say, I’m obsessed.

I adapted David Lebovitz’s vanilla ice cream recipe to make this, and I must say it is an excellent recipe. It made for a very creamy and decadent custard base, which is the key to a good ice cream. I can’t wait to try out some of his other recipes, and I can imagine that each and every one is just as good. He wouldn’t have such a bestseller ice cream book otherwise! 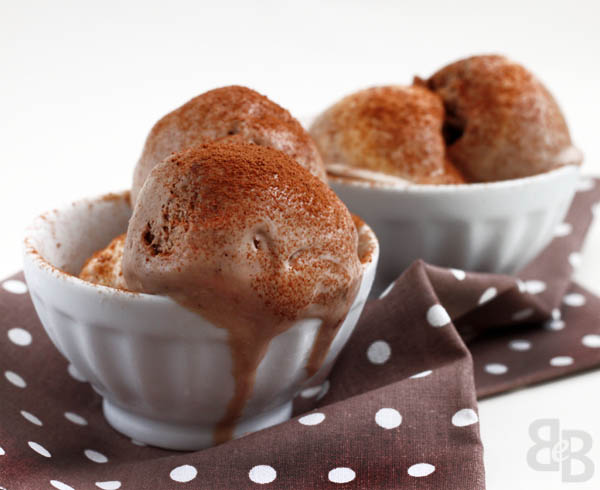 I believe I will be eating a whole lot of ice cream in the near future. Thank goodness it’s summer, which gives me a slightly more valid reason to do so. 😀

Milo ice cream
Adapted from a recipe in The Perfect Scoop

1. Set up an ice bath by placing ice and water into a large bowl.
2. Pour the double cream into a bowl, and place this bowl into the ice bath.
3. Warm the milk, salt, sugar, Milo and vanilla bean extract in a pot over medium heat.
4. In a separate bowl, stir the egg yolks together. Gradually pour the milk into the egg yolk mixture, whisking constantly.
5. Pour the egg yolk/cream mixture back into the pot, and cook over low heat, stirring the whole time. Cook until the mixture thickens to a custard consistency –  it is ready when you can draw a clean line through it on the back of a spoon, using your finger.
6. Strain the custard into the heavy cream. Stir constantly over the ice bath until cool.
7. Refrigerate the custard/cream mixture until thoroughly chilled. Some recommend doing this overnight, I only left it to chill for 4-5 hours.
8. Churn the chilled mixture in your ice cream maker, according to the manufacturers instructions.

p.s. If you don’t have an ice cream maker but still want to revel in homemade ice cream goodness, try this recipe for semifreddo. It’s a no churn recipe that gives rise to something very similar to ice cream, and is just as delicious.