I ate a lot (and I do mean a LOT) when I was in New York, but one of the most memorable foods I tried was the lobster roll at Luke’s Lobster. 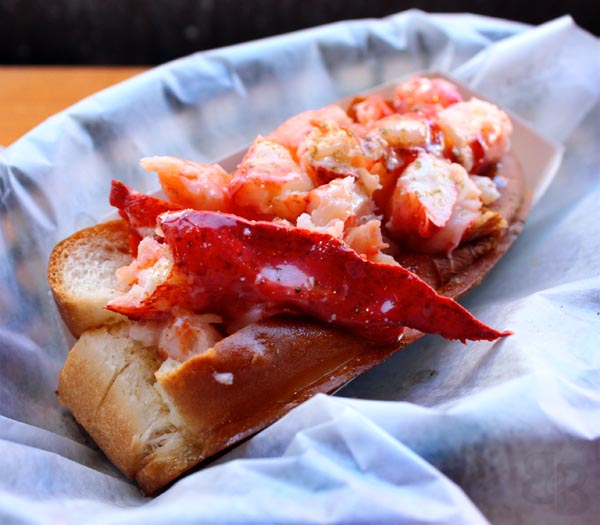 I mean, just look at that baby. Chunks of perfectly cooked lobster, sandwiched between the lightest bread roll imaginable – and they even fry the roll in butter so it’s perfectly crisp. They keep it simple at Luke’s, and the roll is simply seasoned with a dash of pepper and some mayo – but my goodness it’s good. It was utter perfection. I’d heard a lot about lobster rolls (mostly from Catty), and now I know exactly why she was raving about them.

The only bad thing about those lobster rolls are the fact that I can’t get them here. Hawksmoor Seven Dials do have lobster rolls on their menu, but I honestly cannot stomach paying £25 for a lobster roll, especially not when it only costs $15 in New York. Sigh. Luke’s Lobster has absolutely spoilt me, for life. 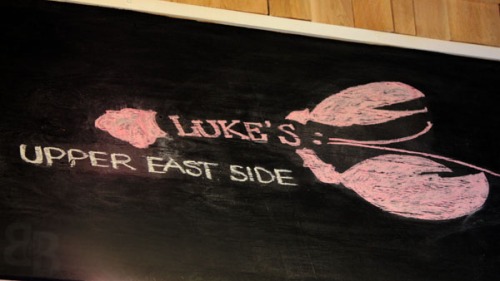 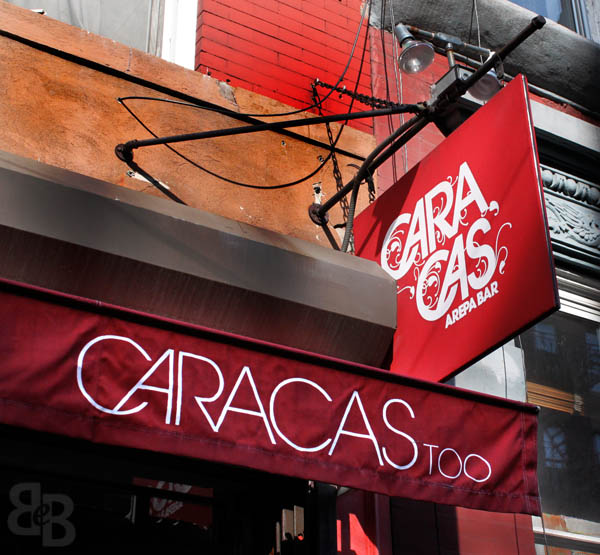 So Luke’s is next to an arepa bar. But what are arepas? I won’t lie, I had no idea either. Stephane mentioned Caracas Arepa Bar to me, and I was intrigued by it as its definitely not something I’ve seen in London. They are very popular in Venezuela and throughout Latin America. The best description of arepas are probably found on Caracas’ website:

Their menu is divided into several sections: Arepas, Empanadas, Salads, Plates, Sidekicks, Beverages and Desserts. The arepa section of the menu is designed for quick ordering and serving, and are coded A1-A20. 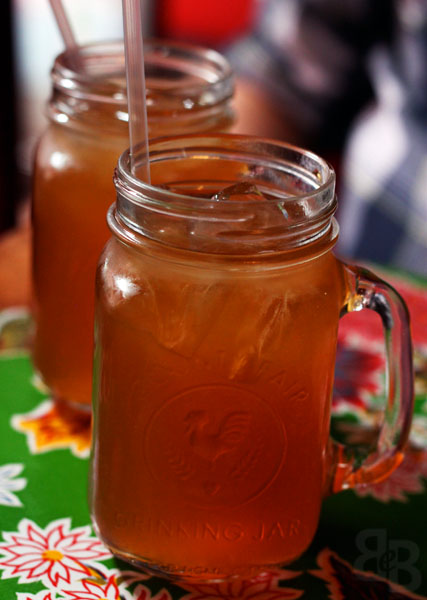 Papelón con limón ($3.50) This was a refreshing blend of dehydrated sugar cane and limes – this was very good, and brought me back to my younger years *cough* where I used to drink it (I fondly remember it as “air tebu”). 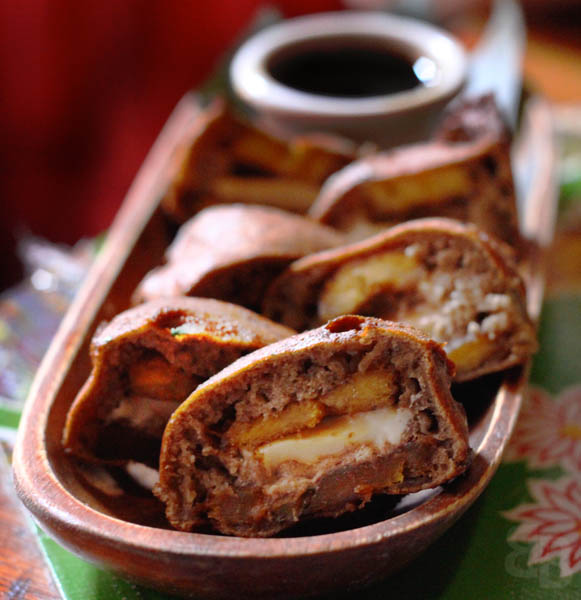 We also tried Yoyos ($5.50), which were described as fried sweet plantain balls stuffed with white cheese on the menu. It sounded so strange that I simply had to try it. I mean, plantains and cheese? Really?? But you know what, it wasn’t bad at all! Taste wise, it reminded me of kuih kodok, a Malaysian kuih made from bananas and flour. 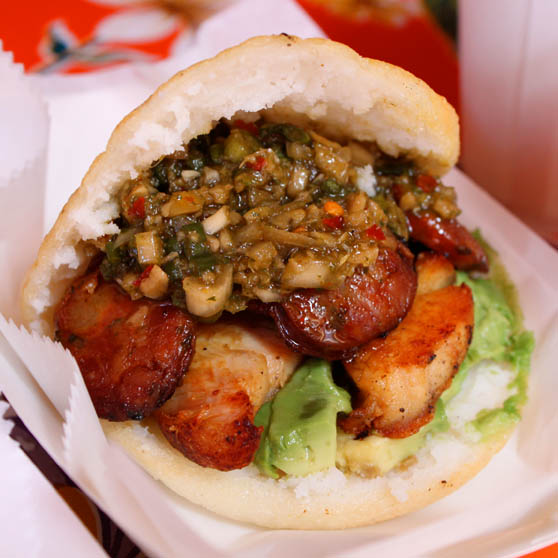 But of course, I was here for the arepas – which were delicious. We tried a a few different flavour combinations, but my favourite was the A20 – La Sureña ($ 7.50). This arepa was filled with grilled chicken and chorizo, paired with avocado slices, and topped with enigmatic spicy chimi-churri sauce. Caracas also has a special sauce which can be used with pretty much everything you order – and you know what, it was seriously addictive. I have no idea what was in it, but I suspect it was a mixture of herbs and possibly mango/papaya. R loved the sauce, and liberally doused his arepa in it. 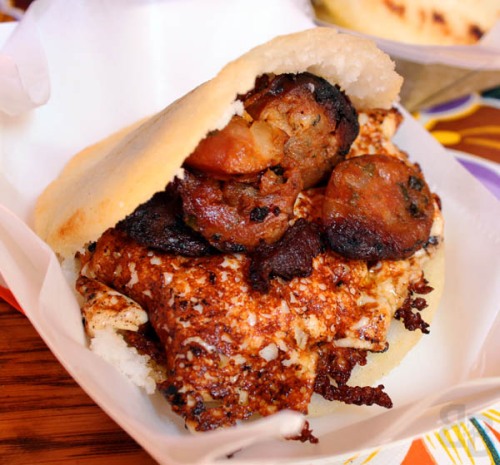 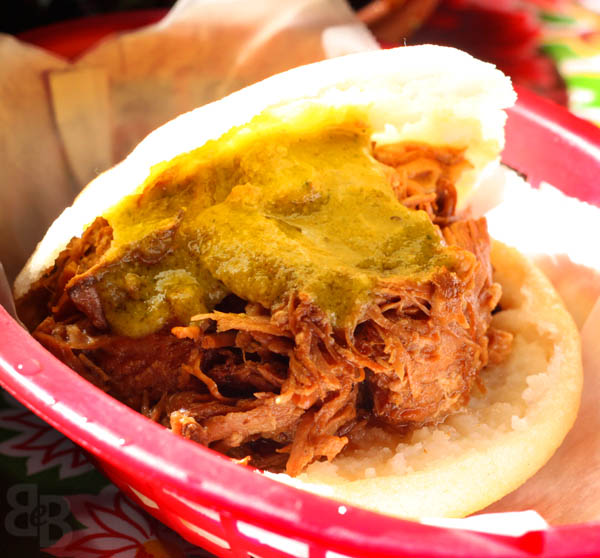 A word of warning though – arepas are NOT date food. It gets messy, especially if you order an arepa with a stew based filling. So yes, not a good place for first dates. Otherwise its a total win. 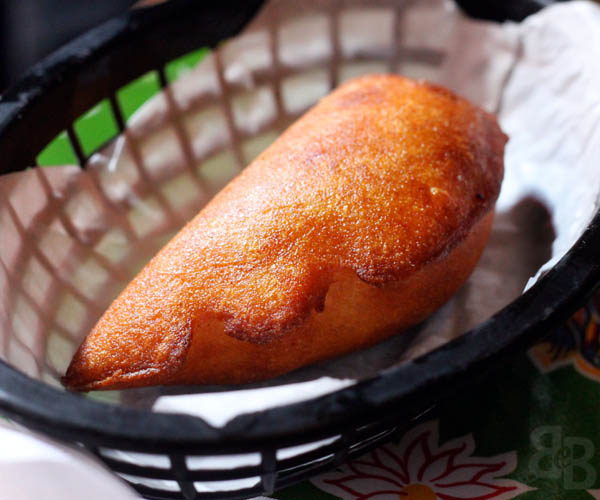 We also tried an empanada, just because. The De Carne Mechada ($5.75) was filled with shredded beef, and was pretty good. I have to admit that my favourite bit of the the whole thing was the crispyness of the perfectly deep-fried pastry. So calorific, but oh-soooo-good. 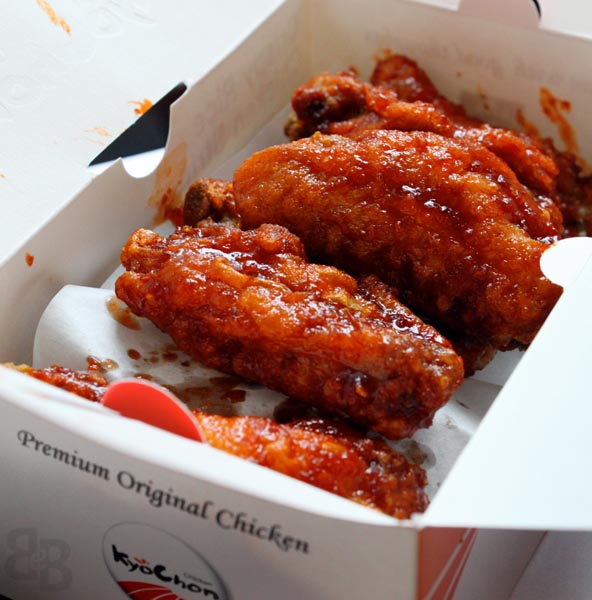 One of the other things I was really looking forward to trying was Korean fried chicken. I’d been told to try Kyochon, and so I did. And I almost cried with joy (and heat) when I took my first bite of their delicious DOUBLE fried chicken wings. That right people, double fried. These were by far, the best fried chicken wings I have had. Ever. The double frying process makes for a very crispy chicken wing, and I wolfed everything down, skin and all. I usually try to not eat too much chicken skin, but Kyochon chicken skins were too good to not eat. After all I couldn’t let R have all the fun now could I? 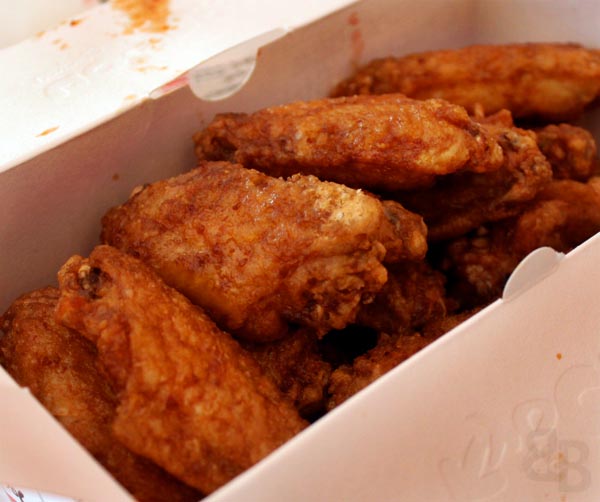 The chicken wings come in two flavours, Soy & Garlic and Hot & Sweet. You can either get them in Regular ($17.99) or Large ($25.99). I honestly cannot remember how many wings were in the Large box, if anyone knows please let me know. There were at least 20, I think. But yes, the flavours. I am forever grateful to the lady at the counter who suggested we order half and half (we were going to get an entire box of spicy wings), because the hot wings were very, very spicy. I was tearing up, my nose was running, and my mouth was on fire. So if you’re not someone who can tolerate ultra spicy things (I love chilli, but this was honestly too much for me!), I would highly recommend going for the Soy & Garlic version. Much more enjoyable when you’re not feeling like you might just burst into flames at any moment. 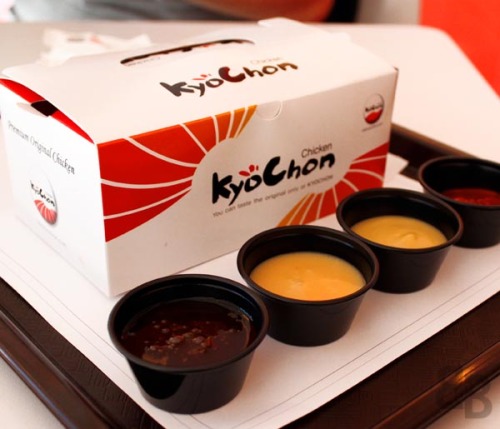 I believe Kyochon also sell some other food items, but I have no idea what they are. All I wanted (and tried) was the chicken wings. There is also Bonchon (just a few steps away) that serve Korean fried chicken, but I didn’t get a chance to try their version. They *so* need to bring Korean fried chicken to London….

And of course, I could not have gone to New York and not tried the burgers at Shake Shack. I’d checked out their menu beforehand (because that’s exactly what food obsessed people do) and was particularly intrigued by the Shake Stack. 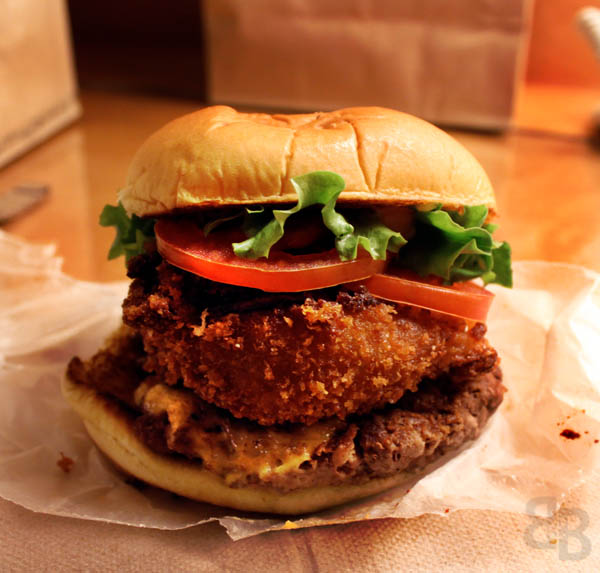 I’m not surprised I was intrigued by the sound of it. The Shake Stack ($8.50) is one of the BEST burgers I have ever sunk my teeth into. It was essentially a cheeseburger served with a crisp fried portebello mushroom, topped with melted muenster and cheddar cheese. There was also the usual burger toppings – lettuce, tomato and their very own ShakeSauce. I always choose to add a portebello mushroom to my burger when I’m at Byron (I like the extra meatiness it brings to the burger), and having it deep fried with a crisp crust was simply a-ma-zing. I thought the beef was good, but not as good as the beef at Byron – but when it comes to the topping/crispy portebello mushroom/cheese stakes…. Shake Shack wins. Hands down. 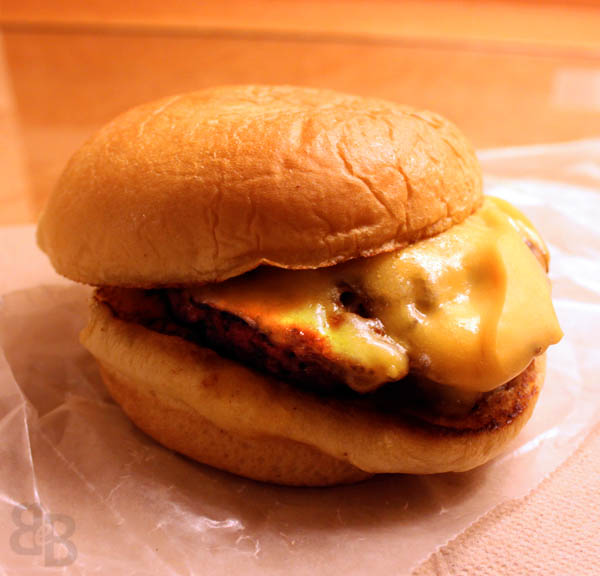 We also tried the Cheeseburger (Single $4.00, Double $6.50). One thing I noticed about the burgers in New York was how good the cheese was. I’m not sure what cheese they used, but there just seemed to be more of it, and it seemed a lot more flavoursome than the cheese we get in burgers back in London. This cheeseburger was no exception. Whilst it was good, it just didn’t have a crispy portebello mushroom…

Shake Shack also do Frozen Custards, which is a mix of soft serve and ice cream. They cycle the flavours, and there is a daily special – which means you could go there every single day of the week and get a different flavour each day. I must admit that I didn’t get a chance to try this, but I will definitely aim to try it the next time I find myself in a Shake Shack. That is the down side of constant snacking… there’s less space for heavy duty things like shakes. 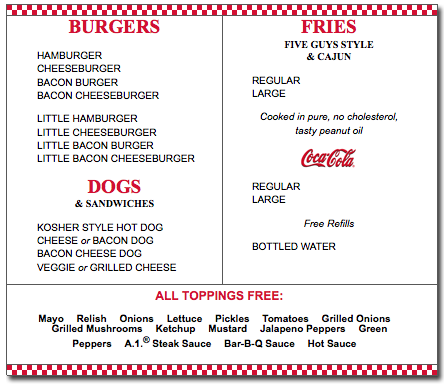 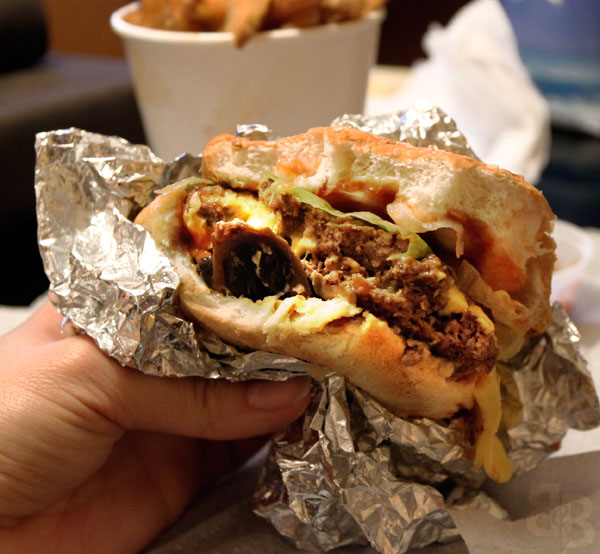 I also have to mention Five Guys Burger, which was only a few blocks away from our hotel. Whilst I didn’t think they were as delicious as the Shake Shack burgers, what I liked was how you could personalize your burger. When ordering, you get a whole list of toppings to choose from, and you can pick as many/as little as you like. So beware if you order a cheeseburger, and say “no” to toppings – that will mean you don’t even get lettuce with your burger! 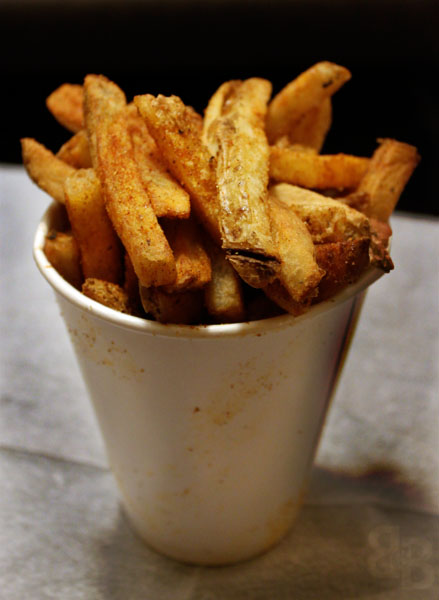 The best thing about Five Guys Burger was their Cajun Chips. Perfectly fried chips, with a delicious spiced powder blend doused liberally over them. There were hints of paprika, cumin, and probably at least 5 other spices. We got a regular serving of fries (which was HUGE), became full halfway through, but still continued eating them because they were too good. And then proceeded to feel absolutely stuffed for the next 2 hours, but it was worth it. Also, I don’t think there was a time when I wasn’t feeling stuffed in New York anyhow.

I think I need to start planning my next trip to New York… soon.