I’ve always had a thing for pineapple tarts. After my beloved peanut cookies, pineapple tarts are next on my “must overindulge in” list during Chinese New Year. My favourite pineapple tarts to date are the ones my mum buys from a Malay lady – melt in the mouth yet crumbly pastry encasing a lovely round of pineapple jam = perfection.

I must say one thing though – pineapple tarts are MUCH more time consuming compared to peanut cookies. I mean, in comparison those peanut cookies were an absolute doddle. Thankfully Catty dropped by to help me make these, and you know what – I could not have done it without her help! She initially thought that she would be “providing the chatter” and “taste testing”… little did she know how much work she would have to do… 😉

There are a few reasons why these are time consuming. 1) The pastry dough has to be “piped” out using a special mould – this is not dissimilar to cookie presses, and gives you the typical scalloped lines you see on the face of the pineapple tarts. The piping process was the hardest part of all. In the end, we decided that the best way to approach it was to have the mould filled with pastry dough at all times – and even then, it was very unpredictable. Push/pipe too slowly and you get breaks in the dough, which essentially means it then cannot be used.

2) The cookie dough is VERY fragile. Very. Even when you get a perfect strip of piped dough – you then are faced with the challenge of not destroying it. We found that the easiest way was for Catty to pipe the strip of dough directly onto my palm. I then placed a ball of pineapple jam ball on it and wrapped it up. Piping the dough onto a baking tray is also an option… but believe me when I say it is very hard to lift it off the tray without destroying it somewhat. So yes, much easier if one person does the piping, and someone else wraps. Trust me on this one. 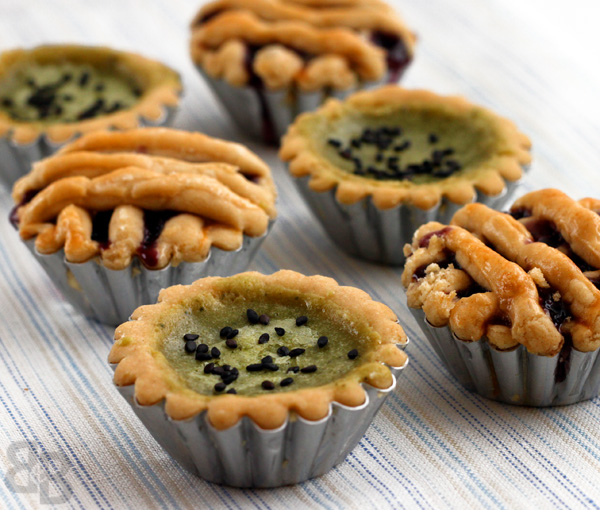 Because I made too little pineapple jam (I saved half a pineapple to err.. eat with rojak sauce), we had some leftover pastry dough. So we made some matcha tartelettes (from some leftover white chocolate & matcha ganache that I had from baking the day before) and some mini blueberry pies. And you know what, those matcha tartelettes were amazing. If you eat them when they are warm, the filling oozes out whilst the delicate pastry melts in your mouth. Definitely a keeper.

But back to the pineapple tarts. These actually turned out pretty well. The pastry was light yet crumbly, and had that essential “melt in the mouth” texture. I did feel that the pastry lacked “fat”, and this is probably because I used a mixture of butter and oil in the recipe. I also thought the pastry could do with being slightly sweeter. The jam was also delicious – you can adjust the sugar content according to your personal tastes, and to the sweetness/tartness of your pineapples. I thought the jam was too sweet, R thought it wasn’t sweet enough, and Catty thought it was fine.

And before I get to the recipe, just a note to say that I had to add an extra 40-50ml of corn oil to the dough as it was originally too crumbly, and wasn’t forming a cohesive dough. I have incorporated this into the recipe below by increasing the amount of butter used.

1. Grate the pineapples, and drain off any excess pineapple juice.
2. Place the grated pineapples, sugar, cinnamon stick and cloves in a pot, and cook over medium high heat. Stir the jam mixture every few minutes to ensure it does not burn.
3. When the mixture starts to dry out (this can take up to 1 hour), add the liquid glucose and wheat starch. This helps to make the jam more cohesive and therefore easier to roll into balls. Cook for a further 5-10 minutes until the jam is dry and sticky enough to be rolled into balls.
5. Cool the pineapple jam, then roll into 2cm diameter balls. You may prefer to do this the day before you make the actual tarts.

1. Sieve the flour, cornflour, custard powder, milk powder, baking powder and salt. Set aside.
2. Cream the butter and icing sugar in a bowl of a stand mixer, until it turns pale and fluffy.
3. Add the vanilla extract and egg yolk, and mix until just combined.
4. Add the sieved flour mixture into the butter/sugar/egg mixture, and mix until it forms a cohesive dough. If it is too crumbly, add some corn oil to the mixture (slowly) until it forms a nice ball of pastry dough.
5. Pipe out a 3 inch strip of pastry using the nastar mould.
6. Place a ball of pineapple jam onto the pastry strip, and roll it up. Repeat with the remaining pastry and jam.
7. Mix the egg yolk and water together, and use this to lightly glaze the tarts.
8. Bake in a 170’C oven for 15-20 minutes, or until golden brown.

Here’s wishing everyone a very happy and prosperous year of the Rabbit. Gong Xi Fa Cai!