I can’t believe it’s 2011 already. I mean, could time pass by any more quickly?

Everyone always tries to be healthier in the new year, especially after the Christmas/New Year “stuff yourself silly” festivities. Although I don’t believe in dieting (hunger makes me grumpy), I do believe in trying to eat healthy. So for the rest of this month, I will be trying to eat more greens and fish, and less dessert. Not sure how well I will actually fare with this, considering how much bbq pork belly I ate in Koba today… oh well. 😛

But in the spirit of healthiness, here is a fairly healthy pasta recipe. (I say fairly healthy because there is some butter and Parmesan used in the recipe.) I first saw this recipe on Jaden’s blog, was immediately taken by the simplicity of the recipe, and so bookmarked it. I have lots of bookmarked recipes, so this was left for a good period of time. But this pasta kept on popping up on the food radar, with everyone raving about how good it was. Which obviously meant that I *had* to try making it.

This tomato basil spaghetti is one of the most popular dishes at New York’s Scarpetta (so I hear), and I’ve read about people who specially make a trip to Scarpetta to try this dish. And after making it, I can see why. The freshness and sweetness of the tomato sauce that coats each strand of spaghetti is infinitely better than ready made pasta sauces – and when you think about how simple it is to make, it will make you want to give up on premade sauces altogether. 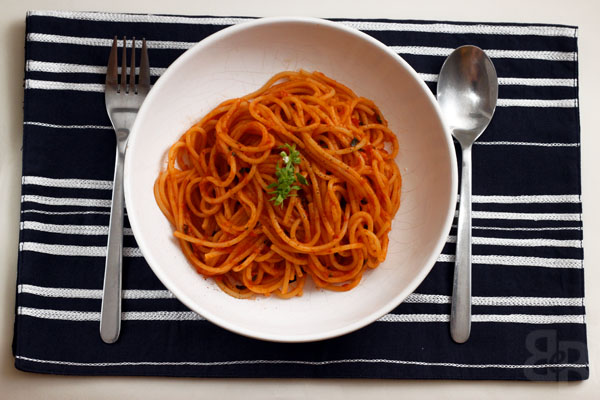 The original recipe calls for fresh plum tomatoes, but I used a mixture of fresh and canned plum tomatoes. The quality of your tomatoes are important, as you want the freshest and sweetest tomatoes you can find (they don’t necessarily have to be plum tomatoes, I’m sure other varieties would work just as well). Quality may cost more, but trust me when I say it will be worth it when it comes to making this sauce.

The spaghetti is served with a garlic basil oil, which in my opinion brings the dish to another level whilst not overpowering the star of the event – the tomato sauce. The oil is made by infusing garlic, fresh basil leaves and a pinch of chilli flakes in hot olive oil. I might take the “lazy” route the next time I make this, and infuse fresh basil leaves in store bought garlic olive oil (Waitrose does a fantastic one which I use everytime I don’t want to chop garlic). Plus I think that the intensity of garlic is more evident in the store bought oil – I’m a HUGE fan of garlic you see.

Scarpetta’s tomato basil spaghetti
Adapted from this recipe on Steamy Kitchen, who adapted it from Scarpetta and Scott Conant

For the garlic basil oil:

To prepare the tomatoes: (you get to skip this whole part if you use canned tomatoes)
1. Bring a large pot of water to a boil. Have a large bowl of ice water nearby.
2. Whilst waiting for the water to come to a boil, cut a small X on the bottom of each tomato. Ease tomatoes into the pot and boil for about 15 seconds, then promptly move them to the waiting ice water.
3. Pull off the tomato skin with the tip of a knife (a normal butter knife works fine).
4. Cut the tomatoes in half and use your finger to flick out the seeds.

To prepare the tomato sauce:
5. Heat olive oil in a large pan over medium high heat. Add the tomatoes (both fresh and canned) and red chilli flakes to the pan, and season with salt and pepper. It’s safer to under-season at this point, as the sauce will reduce down later.
6. Let the tomatoes cook for approximately 5 minutes, or until they become soft and mushy.
7. Use a potato masher to mash up the tomatoes. (You don’t have to mash it all into a smooth paste, but I try to mash it up as finely as possible.)
8. Cook the tomato sauce for 20-25 minutes, until it thickens. Whilst the sauce is cooking, make the garlic basil oil.

To make the garlic basil oil:
9. Put the olive oil, garlic cloves, basil leaves and pepper flakes in a small saucepan, and heat over low heat. Allow the ingredients to warm slowly to release their flavours.
10. When the garlic is lightly browned, turn off the heat, and let it cool.
11. Before using, strain the oil and discard the solids.

And to put it all together:
12. Cook the spaghetti in boiling, salted water until just shy of al dente. Drain and reserve a little pasta cooking water.
13. Add the spaghetti to the tomato sauce and cook over medium high heat, gently tossing the pasta and the sauce together with a couple of wooden spoons. (You can use tongs but this increases the risk of breaking up the wonderfully long pasta strands.) If the sauce seems too thick, add a little pasta cooking water to it to thin it down.
14. Remove pan from the heat, and toss with the butter, basil and Parmesan.
15. Serve the spaghetti into plates, drizzle with the garlic basil oil, and serve! 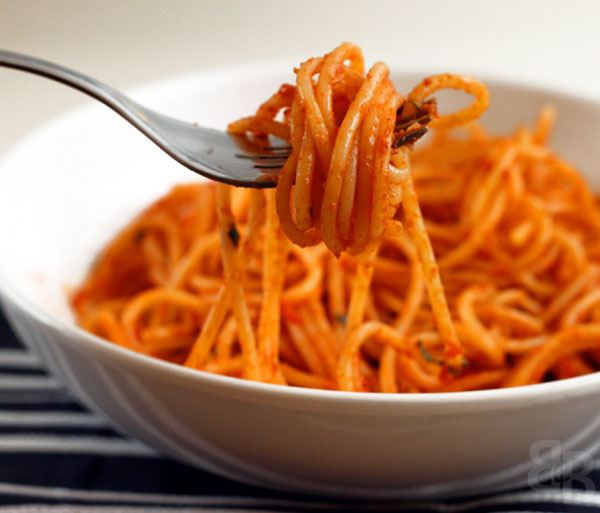