My attitude towards food has changed in the last few years. I used to be the sort of person who would ‘wing’ it when it came to meals whilst on holiday. Then there’s the me of today, who researches the food before anything else when it comes to holidays… and you know what, I’ve eaten better since I started doing this. I mean, trawling through restaurant reviews and making a shortlist of restaurants has to have some sort of benefit, right? 😀

We truly indulged in food (and gelato) whilst in Florence. Don’t ask me what it was, but we were eating twice the amount we normally do in London. I don’t regret a single bite of it though, and would go back and do it all again. (Except if I did I might no longer fit into my clothes….)

If you’re not familiar with Italian dining, the menu is often broken down into a few parts… First of all you have the antipasti (which translates into “before meal”), which is usually a selection of cold items like cured meats. Then you have the primi piatti (first course) which consists of dishes like pasta, polenta or soups; as well as the secondi piatti (second course) of meat or fish. Lastly there’s the dolce (desserts). From what I understand, not everyone has all 4 courses… because let’s face it, that is a whole lot of food to eat. When we were there, we ate 3 courses at the most.

Here’s a peek of the deliciousness that was Florence…

I’d read good things about this osteria, and immediately put it on my ‘to eat’ list after I visited their website. What can I say, I’m a complete sucker for well constructed websites with good photos. I wasn’t dissapointed though, so maybe this whole ‘judging a book by its cover’ thing works at times…

Photos (unfortunately) have a yellowish tinge to them due to the lighting… *sniff* Food was amazing though, so look past the yellow-ness! 🙂 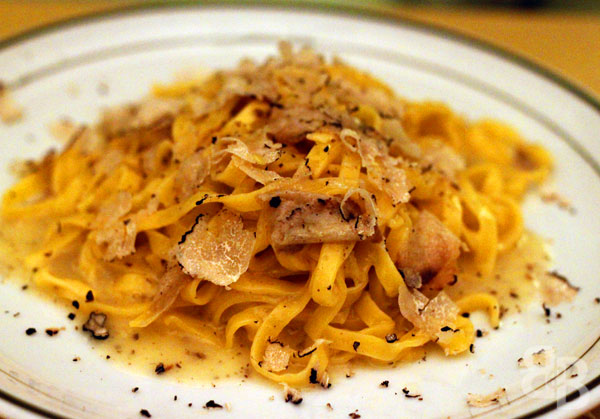 Taglierini al tartufo (taglierini with fresh truffle) – this dish was simplicity at it’s best. Being someone who had never tried truffles before (I know, shocking) I instantly fell in love. The strong nutty flavours of the truffle complemented the perfectly cooked taglierini very well, and I only wish I could have regular access to this dish in London.

Pappardelle al cinghiale (wide ribbon noodles with boar sauce) – by far, one of the best ragus I’ve ever tasted. I suspect it’s because it used wild boar meat for the sauce, which gave it a very hearty and “meaty” taste. If only I had easy access to wild boar meat! 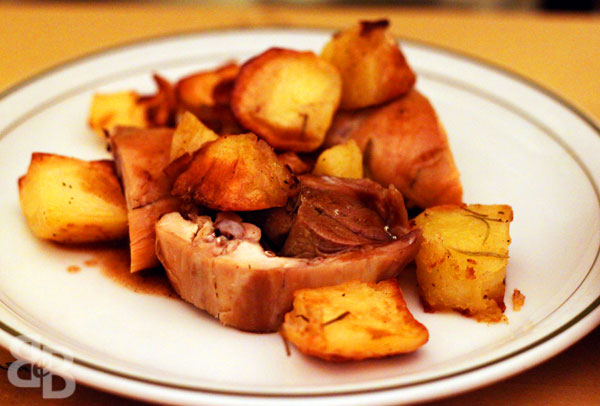 Coniglio arrosto con patate (roast rabbit with potatoes) – It’s always nice to see rabbit on the menu, and we decided to have this as one of our main courses. I don’t know about you, but I find that rabbit tastes very similar to chicken – but with a slightly game-ier aspect to it. If that makes any sense.

Maialino arrosto con contorno (roast baby pig with roast potatoes) – I’m a sucker for pork, especially when it’s cooked well. This dish was cooked perfectly, and the meat was deliciously tender. Accompanied with the roast potatoes and gravy, I was in heaven. 🙂

Panna cotta with chocolate sauce – Now I must be honest, I was completely stuffed by the time it came to contemplate dessert. But I had spied the neighbouring table order some dessert and willed my stomach to make some space for something sweet. Mind over matter and all, you know. 😉 Boy was I glad I did. This panna cotta was perfect. Creamy, gooey, and with just the right amount of wobble. The chocolate sauce that came with it was rich and not overly sweet, and was a perfect pairing to the panna cotta. I could eat this everyday.

Tiramisu – this didn’t look like very much when it was brought to the table, but I must admit it did taste good. The sweet mascarpone cream, liqueur soaked sponge and coffee flavour… all done to perfection. I still preferred the panna cotta though, and I suspect it’s because I was enthralled by it’s wobbliness. 😀

We turned up (without a reservation) at this very popular restaurant around 8pm, and was told that there were only 2 tables left, but they were located near the kitchen. I like having a nice atmosphere when dining, but in this instance the need to try out this highly rated restaurant overrode the need for not seeing waiters rushing in and out of the kitchen. And you know what, I barely noticed them. One thing I really did not like about this place was how DARK it was! Sure, it was romantic and all but it was a nightmare for any food blogger. All I had for lighting was literally the candle on the table (oh and some really dim lights on the ceiling)… I wanted to weep. I still managed to take photos though, but please forgive the poor quality!

Also, I forgot to note down the exact names of the dishes so I’ll be describing them based on what I remembered of the waiter’s explanations…

Spaghettini with clams, fresh spring onions and botargo fish roe. I expected the usual spherical fish roe, and was very surprised when this dish came to the table – my first thought was “where is my fish roe?”. Then I realised that the shaved orange pieces on sitting upon the mound of pasta were the roe.. and you know what, they tasted really good. A bit like a very fishy version of proscuitto. I’ve since done a spot of googling and found out that botargo is a Mediterranean delicacy of cured fish roe, usually served grated or in thin slices. The fresh spring onions were an interesting addition, and gave a ‘fresh’ taste that cut through the fishiness of the roe and the clams. I really enjoyed this dish.

Pasta with a duck ragu, topped with a deep fried sage leaf. I love duck (roast duck rice is truly one of my comfort foods), but have never ever had it with pasta. This dish was a revelation – I mean, duck in pasta? Genius. I might just have to attempt recreating this at home.

Artichoke souffle topped with fried artichokes, served with a lemon sauce. Now, I really wanted to try this because I looove souffles. I was expecting some really nice puffy souffle, and was really disappointed when this was served. It tasted more like a mousse than a souffle. I have to admit that I enjoyed the flavour of artichokes in this, but I wish I had forgone this dish to make space for dessert – what was I thinking? Sniff. 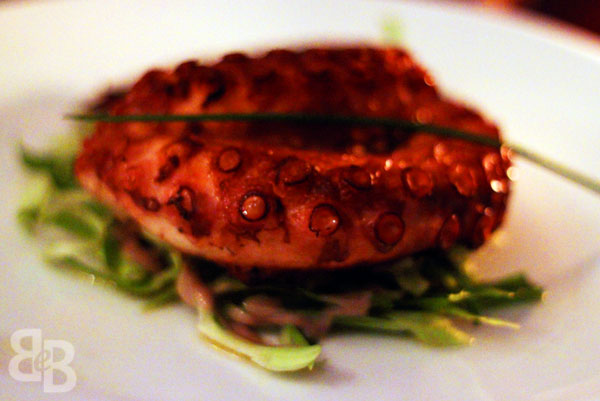 Grilled octopus served with romano chicory and citrus glaze. I can safely say all my previous experiences of eating octopus has not involved eating a beast as big as this. It was beautifully cooked with no hint of rubbery (I hate it when that happens)… glorious. Admittedly I wasn’t a fan of the chicory, but that’s because I don’t like anything that’s bitter. Errr so I just ate the octopus. R had to eat most of the chicory. 😛

Cod fillet with caramelised aubergines and juniper berries. This dish was SO pretty. As I have mentioned, I’m a complete sucker for anything that is plated beautifully, and this dish was one of those. The cod was perfectly cooked, and I especially enjoyed the crust – not sure what it was… possibly some semolina? No idea. The caramelised aubergines were divine, with just the right amount of charring on them. All that paired with the mild sweetness of the juniper berries made for a very good dish.

This was located slightly off the main areas of Florence, in a ‘not so touristy’ area. We turned up quite early (it was just after seven I believe) and were told they only opened at eight! So it was off for another wander around the streets of Florence until 8 o’clock came about. The menu was in Italian (no English menus here) so we had to ask our waiter for help when it came to ordering. The food here was lovely but something was lacking… maybe it was the fact that the restaurant was really empty (it was a Wednesday night), or the fact that they forgot to bring the white beans that we ordered to go with our steak. But as I said, the food was good so it didn’t matter as much.

Spaghettone in salsa d’acciuga (spaghetti with an anchovy sauce). The menu stated that this would take 18 minutes to prepare, but we weren’t too fussed as we weren’t in a rush. I’m also a huge fan of anchovies and wasn’t going to pass up a chance to try this. And I’m so glad I did. I don’t know how they did it, but the pasta was miraculously not salty at all. I’m still trying to figure it out, because I would love to recreate this in my own kitchen. 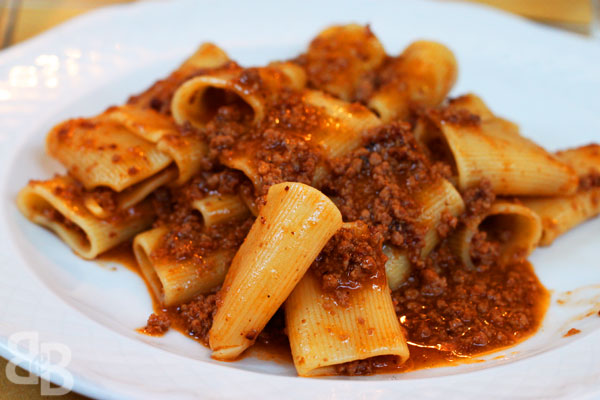 Mille righe al sugo di carne (penne with a ragu sauce). This was good, but not as good as the wild boar ragu we had at Osteria del Cinghiale Bianco. I know it’s not really fair to compare wildboar and beef, but oh man, wildboar ragu is awesome. 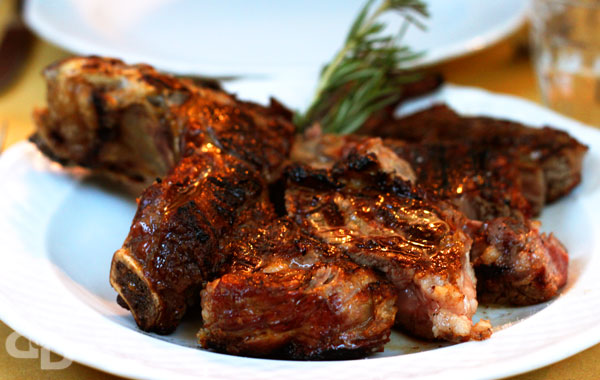 Bifstecca alla fiorentina (Florentine steak). One word – yum. We eat our steaks medium rare, and they cooked it perfectly. Not too underdone, and not too overdone. The meat was also beautifully tender, not something I can always say about steaks. Now, I won’t lie – I have almost no knowledge of steaks (apart from how to eat them), so I decided to do a spot of googling. It’s actually rather scary how I rely so heavily on google… Anyway. Florentine steak is essentially a T-bone or porterhouse steak (taken from the loins), usually from Chianina or Maremmana breeds. It’s usually cooked rare or medium rare over a grill/charcoal fire, and served with a side of white beans. We ordered some beans to go with the steak, but it never came. You might ask why we didn’t ask for it, but the waiters were no where in sight for the first 5 minutes, and I’m not someone who can refrain from eating food that’s sitting right in front of me. It didn’t take anything away from the gloriousness of the steak though.

So yes, that’s some of the food we ate in Florence. Just so you know, I’ll be blogging about other things in between the Florence posts, as to not bore you all. 🙂

Osteria del Cinghiale Bianco
Borgo San Jacopo, 62r
50125 Firenze, Italia
+39 055 215706
http://www.cinghialebianco.it/ (for some reason their site seems to be down at the moment…)
Closed Wednesdays

And lastly (forgot to take a photo of this one):